The Kolb Award is given by the Department of Community and Environmental Sociology to a graduate student whose work is of the highest scholarly caliber. This year’s winner is Adam Slez. Adam seeks to understand how political interests and identities coalesce in relation to states and parties. Whereas his previous previous work focused on the relationship between state and party formation in the United States Constitutional Convention, Adam’s dissertation examines the way in which policies related to the distribution of public land contributed to the dynamics of third-party mobilization in the American West during late 19th century. 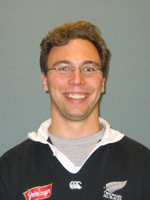 Drawing on a wide range of sources, including historical railroad maps, public documents, and contemporary geographic data, Adam focuses on the way in which policies related to the expansion and regulation of the railroad network shaped the ecology of political contention in the agrarian periphery during the so-called “Populist moment” in American politics. Taking Populist rhetoric seriously, he analyzes the relationship between third-party support and the spatial dynamics of state-sponsored market-building under the Republican Party. Adam addresses this question through a formal analysis of election returns in Minnesota, North Dakota, and South Dakota between 1890 and 1896. Through the use of spatial data analysis, he shows that third-party support tended to be highly localized. Adam finds that the intersection of market structures, crop production patterns, and state boundaries created a diverse political topography which varied markedly from one place to the next.

Adam Slez’s work has also recently begun to extend in a new direction through collaborations with assistant professor of Community and Environmental Sociology Katherine Curtis and recent UW sociology PhD Amy Quark. Building on their common interests in spatial data analysis, railroads, and the Great Plains, Adam and Katherine have begun work on a study analyzing the effects of spatial and organizational connectivity on county-level population growth on the Northern Great Plains between 1880 and 1930. Adam is also working with Amy on a project which uses data on international trade flows to help explain the changing dynamics of rule-making in the global cotton trade over the past forty years.

Adam recently began a Postdoctoral Research Associateship at the Center for the Study of Social Organization at Princeton University.